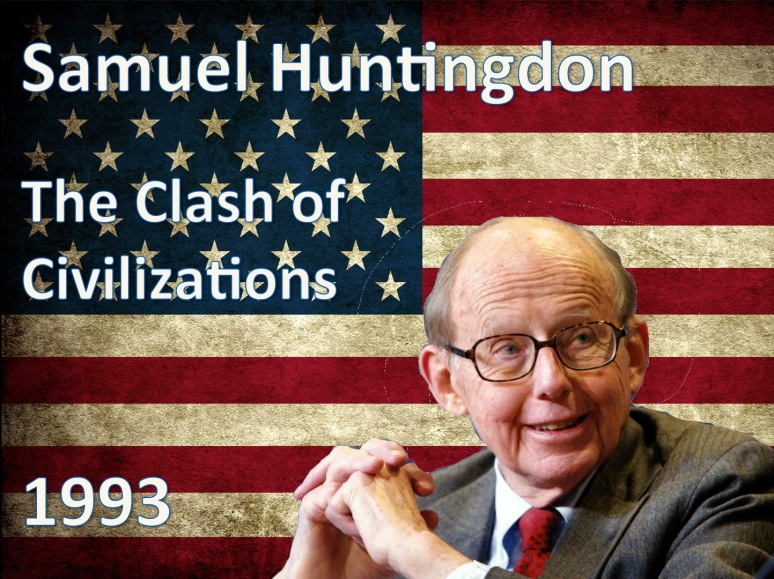 Greetings friend! Welcome back to GeoPolichinelle as we prepare once more to explore the impact on the present day of another dead geo-political theorist. In part 5 of our ongoing 435 part series Better Know a Titan of Geopolitics, we fall head first down the rabbit hole with “The Clash of Civilizations” by Samuel Huntingdon – the fightin’ Crimson!

Fellow followers of the forlorn fiasco that is foreign policy and geopolitics in the age of President Trump will no doubt be familiar with the name of this piece, if not the name of the author. A few days ago the Donald gave a rousing speech to an enthusiastic gathering of rent-a-crowd extras in Warsaw, during which he called upon the ideal of a clash between Western values and the insidious forces of evil (read “Muslims”). He sounded remarkably like a freshman student who has been assigned Huntingdon in an intro to IR class, but didn’t bother to actually read it (like most of them!) and just read the Wikipedia page instead.* Doubtless our 45th president also keeps a copy of Atlas Shrugged conspicuously on display in the Oval office, and secretly yearns to play Ultimate Frisbee with all the cool kids as well, but that is as may be. Suffice it to say, he gets a D+ on this homework assignment – must try harder.

In true “I don’t know exactly what I’m doing, but this sounds good” fashion, el Generalissimo took the opportunity to frame his presidency in terms of the classic “us v. them” mentality so reminiscent of old school geopolitical narratives. Given that this speech was delivered in Poland – a country that is going through some serious political upheavals over the populist, right-wing agenda of the ruling “Law & Democracy Party” it cannot be much of a coincidence that a) the Donald was invited to come over and pontificate in the first place or b) the following week there were mass protests in the streets and an outpouring of concern about the authoritarian trends being displayed by the government. Causation and correlation are, of course, two separate things but the environment that facilitated the first was clearly also the catalyst for the second. Donald is not the cause of resurgent right-wing populism by any means, but he is surely symptomatic of its disquieting effects, both at home and abroad.

To that end, he swung hard for the fences by stating, “I declare today for the world to hear that the West will never, ever be broken. Our values will prevail. Our people will thrive. And our civilization will triumph.” Quite what was threatening the immanent fall of Western civilization was not clear, nor was it immediately apparent who the President intended to put on notice with this heroic declaration, but like a modern day Horatius he stepped forward to defend the Sublician bridge of Western values against the forces of darkness, and there was a great rejoicing throughout the land – or something to that effect (WARNING: The previous link is to a gruesomely AGITPROP report from Brietbart News. GeoPolichinelle does not condone and is not responsible for the content of third party webpages!).

So, how does all of this connect back to the illustrious Prof. Huntingdon, I hear you ask? Well, for one thing, Huntingdon’s most celebrated contribution to the world of Geo-Politics was penned in 1993 as a response to the end of the Cold War (in 1990) and the emergence of a “new world order.” His central premise was that now the clash of “ims” had ended (Communism v. Capitalism, and so forth) the next source of inevitable conflict would occur between “cultures” rather than states or ideologies – a clash of civilizations, if you will. Poland is an ideal example of the kind of thing that Huntingdon was concerned with, as it was transitioning from being a Soviet satellite state into the new/resurgent “identity” of a Western Christian state. He identified a variety of “civilizations” that now dominated the world, from Confucian to “possibly African” (I’m not kidding – he actually says this) but saved most of his interest for the coming tensions between the Western Christian, Eastern Orthodox, and Muslim civilizations. His original article from 1993, which you can listen to below, was later expanded into a book, and played a role in helping to galvanize the ethnic cleansing and genocidal insanity of the Balkan conflicts during the mid 1990s – and while it is not fair to suggest that Prof. Huntingdon was in any way responsible for those events, it is fair to say that his vision of a world driven into a zero-sum game of cultural conflict provided a convenient framework through which to actualize that rather heinous vision. 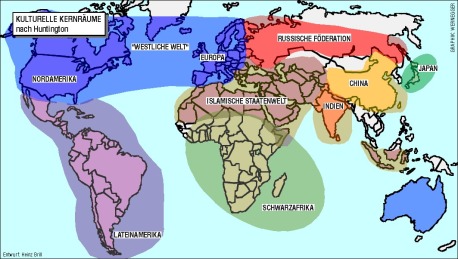 For those of you who are seriously interested in geopolitics, this illustrates a key concept for modern “critical” geopolitical theorists: namely, that old school geopolitical narratives are inherently anti-geographical in nature, and are designed in many ways to obfuscate the complexity and heterogeneity of the real world by subsuming them under convenient labels – First, second and third worlds for example, or the “heartland” and the “marginal crescent.” In this instance entire swaths of the world are lumped together as “possibly African” or “Muslim” with only limited thought expended on the total lack of cohesion that these labels serve to obliterate. To be clear, Huntingdon does explore the divisions that can exist within these otherwise monolithic constructs, but that kind of nuance quickly falls away when folks tend to just read the cliff-notes Wikipedia version, or alternatively insist that their foreign policy briefings come in at under four minutes and on a one page memo, preferably with pictures.

Here we find the importance of maps, and the ways in which they help to solidify specific visions of the world. Even though the original article does not include a global overview image, if you plot out Huntingdon’s basic premise it looks an awful lot like a “Risk” board. The map above perfectly captures the giant brushstrokes of Huntingdon’s analysis, and as with Risk, in both instances the “The Ukraine is weak.”

So, in order to ensure that you, faithful reader and follower of the farce, are not caught short I have recorded (complete and unabridged) Huntingdon’s original 1993 article, in all its somewhat hyperbolic glory. This is intended for educational purposes only, in that I really wish folks who bandied the concepts around on a regular basis actually understood just how…, er…, dangerous a little knowledge can be, when you don’t actually engage fully with the reasoning behind the catchy slogans. Huntingdon DOES state that it is “the West against the rest” and that “Islam has bloody borders” – but in-between those two sound bites he also goes on for another hour about why he think this. If you don’t understand his reasoning, then it is very hard to know how/why/if you agree/disagree/think he was a nut-job!

Don’t be like our commander in chief, my friends – settle in for your morning commute, and listen to 56 minutes worth of new “old school” geopolitical shenanigans, complete with prophecy, paranoia, and prolific pontifications. – just like the good old days!

*Note: As an aside to all my student readers – we know you do that. Why do you think we set the exam questions the way we do, eh? I know one TA who goes into wiki and changes specific details just before exams, so that s/he can tell who has the done the least possible work. Just read the damned articles already! You have been warned…