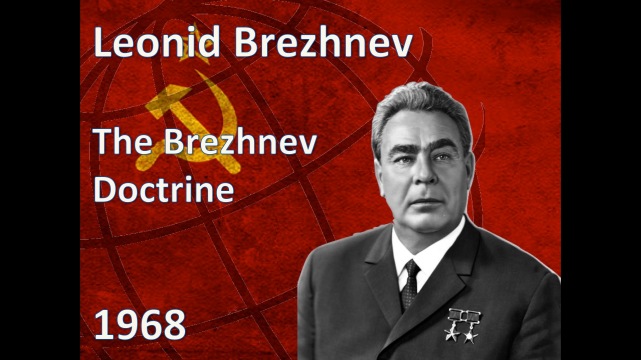 Welcome, weary traveler,  to part 4 of our 435 part series “Better Know a Titan of GeoPolitics” – Leonid Brezhnev – “the fightin’ Commie!”

Oh, the Cold War! What a fascinating time to be alive, especially if you took an interest in the abject hypocrisy of GeoPolitical narratives – provided you lived far enough away from the front lines that you didn’t have to deal with the actually consequences, of course. It is hard these days to understand just how messed up the Cold War was, even for those of us who did not live behind the “Iron Curtain” of the Warsaw Pact. I grew up in England in the 80s, meaning that the threat of nuclear annihilation was something you just had ticking away in the background. Mutually Assured Destruction – possibly the most moronic geopolitical phrase to filter through to my youthful self – was something that was discussed on a regular basis as if the concept was a perfectly normal approach to the idea of “national security.” So ubiquitous was the idea of laying waste to vast stretches of the Earth, ostensibly in order to stop the dreaded Commies from annexing Europe, that it even made its way into the popular culture of the day. The following clip from “Yes Prime Minister” is (possibly) the first piece of GeoPolitical satire that I can remember watching as a feckless youth…

All jokes aside, the prospect of the Red Menace sweeping away all resistance before them was quite palpable, given the fact that the Soviets had already demonstrated quite conclusively that there were willing to ‘go to the mats” if necessary. The “Warsaw Pact” (formed in response to the creation of NATO, and not the other way around as is often suggested) was a formidable opponent, and in 1968 things were looking a little tense along the fault lines between East & West.

The piece we are going to listen to today is known as the “Brezhnev Doctrine” and is the exemplar of a Soviet post-fact justification for the violent repression of a sovereign state. Shortly before Comrade Leonid gave this speech to a group of desperately enthusiastic Polish Communists, the USSR and its Warsaw buddies invaded Czechoslovakia in order to quell the rising tide of, well, anything that wasn’t considered to be “true” Marxist-Leninism.

What makes this piece of work so fascinating is the way in which it seeks to explain how invading a state and ruthlessly crushing its populace is, in fact, the clearest example of supporting the supreme sovereignty of the proletariat! All cognitive dissonance not-with-standing, you have to admire the bait and switch on display here – it is not the Soviets who threaten the sovereignty of the people of Czechoslovakia, but the Western Imperialists who have sought to undermine the advances of the populace. How insidious of those damned imperialists! Perhaps the greatest example of this is where it states that, sure – invading with an army might look like it is a violation of international law…, BUT that is only due to the fact that you are not looking at the, er, facts through the lens of ongoing class struggle! See, if you just apply the appropriate filter it all starts to makes sense!

While Commissar Brezhnev, in his capacity as the General Secretary to the Central Committee of the Communist Party of the Union of Socialist Soviet Republics (he liked a large business card) was a good man for delivering a finely tuned polemic, he was not necessarily the intellectual powerhouse behind this fine piece of rhetorical shenanigans. Therefore, I have also included a recitation of an article written for Pravda that lays out, in more scholarly terms, a more nuanced explanation of exactly what the Brezhnev doctrine does, vis a vis the notions of Soviet foreign policy moving forward.

For modern students of the farce, what might be most 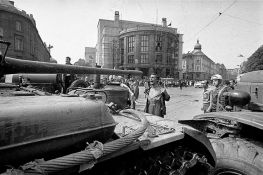 surprising is the number of positions taken that sound disturbingly familiar to anyone who lived through the Bush administration. Pre-emptive strikes? Check! A bi-polar worldview that only envisions two camps – either with us or against us? Check! A foreign policy “doctrine” that brooks no dissent on the basis that we are effectively at war against enemies that would seek to destroy our very way of life? Check, check and check!

So there you have it! Pull up a chair, pour yourself a stiff shot of Vodka (adding a little pepper to soak up the diesel fumes) and revel in the belligerent double think, hyperbole, and relativistic obfuscation. Zda-ró-vye!